DEMANDAFOLK is a “non conventional”, free, traditional music festival, suitable for the whole family, which takes place the first weekend of August at Sierra de la Demanda (Burgos)
They strongly believe that with projects like DEMANDAFOLK®, they contribute to Sierra de la Demanda revitalization, attracting a high quality tourism to the region.
On the other hand, in view of the festival ́s “non conventional” features (an original format, a mixture of Folk festivals and other kinds of events suitable for every kind of audience), they help to recover folk music, giving a chance to the youngest to discover the wonders of traditional music, achieving to attract their interest in their ancestor ́s chants, customs and instruments, always ensuring the outmost respect for our beautiful surrounding environment.
This year the musical program is:

It is a group born in 2002, with the help of several friends and common musical interests in finding a timbre and an energetic and powerful repertoire. Folk roots, but without prejudice, his compositions convey not only what they have experienced, but also what they have dreamed.

La Tolba is a choir composed of people from several villages from the region. Although their career began more than 15 years ago, DEMANDAFOLK has meant an incentive to return to rehearsals, mending costumes and retrieving new songs. Under the direction of Antonio Almaraz, they are in charge of the DEMANDAFOLK opening concert since 2008.
Saltabardales (Cantabria)

If there is a group that has been lavished with extraordinary frequency at festivals and celebrations conducted in the northern region of Cantabria, that is certainly Saltabardales. The band dived mainly in the musical tradition of his country to highlight their most popular and festive side . Among the years 2000 and 2005 released five albums, one dedicated to folklore though mejicano. They announced their retirement in 2005, fortunately still they are performing concerts more or less continuously, and we will be lucky to enjoy their powerful live.

El Naán links traditional Spanish music with roots music from around the world, making it a universal proposal. His concert combines traditional music, with codes and recognizable timbres by the public, and other sounds and rhythms that have influenced the Spanish culture, as the rhythms coming back and back from American and Arab sounds. All this is offered in a very beautiful concert, with  the pleasures and the presence of visual and video art.

Muyayos de Raíz is a product of the earth, a quartet of unusual instrumentation with folk roots from different parts of our continent. Using their own arrangements and compositions, exploring new ways of interpreting traditional music (Gypsy, Celtic, Basque, Galician …) giving a cool, refreshed and full of life air. In his sound highlights the fact that all are classical musicians, collaborators with orchestras such as the Symphony Orchestra of Castilla and Leon, Rotterdam Kamerorkest and the National Orchestra of Spain among others. Muyayos de Raíz have acted on numerous occasions in the Netherlands and in Spain, Portugal and China, being the energy, strength and happiness basic ingredients in their concerts.

La Troba Kung Fu have three demands: trova as an attitude of making songs and compose music in the style of the ancient minstrels and troubadours; kung-fu, which is the art of discipline to achieve perfection, and the Catalonian rumba genre created by the Catalan gypsies to mid rock & roll, mambo and listening to tunes, dancing at parties and in the weddings.
The Troba Kung-Fu vindicate the singles and Catalan rumba Havana as a musical language or certifying the origins and roots to mix with Balkan rhythms, tex–mex, vallenato, cumbia, reggae, hip hop, Cajun.

Irish Treble are eight young Irish, four musicians and four dancers who have come together to create a spectacle with which to publicize the Irish dance. The dancers‘ Irish Treble “have a varied program ranging from traditional to modern dances choreographed show-style. All this to the sound of reels, jigs, slip-jigs and other typical rhythms of Irish music, played by live musicians incorporating traditional Irish repertoire of Spanish folk songs and original arrangements of themes well known to the public. They have performed at festivals and theaters making the public enjoy and leading Irish music and dance into a real show. 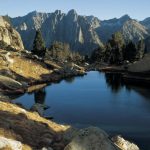